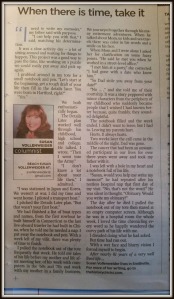 This is from a physical newspaper. It’s tossed in the driveway- rain or shine…usually- and you read it over coffee. Welcome to The Old School where traditions are charming and recycling materials are born.

The following  first appeared in my Kansas City Star column on April 8, 2015. I thought that it also belonged here.

“I need to write my memoirs,” my father said with purpose.

“I can help you with that,” I matched his determination.

It was a slow activity day–a lot of sitting around and waiting for things to happen. This project was a good way to pass the time, like working on a puzzle we could easily put it away and pick it up again.

I grubbed around in my tote for a small notebook and pen. “Let’s start at the beginning, get a rough draft of your life then fill in the details later. You were born in Hartford, right?”

We both enthusiastically began.

The Details Later plan worked well through his childhood, high school and college. He talked, I wrote. “Then I went into the Army.”

“I don’t know a lot about your life then,” I admitted.

“I was stationed in Japan and Korea. We weren’t at war, I did my time and went home. I piloted a transport boat.”

I pitched the Details Later plan. “But that wasn’t your first boat.”

We had finished a list of boat types and names, from the first row boat he built himself in Connecticut to the last live-aboard trawler he had built in China, when he told me he needed a nap. I put away the notebook and pen. With a week left of my visit, there was plenty of time to finish.

I pulled the notebook out of the tote frequently that week. He told me tales of his life before my mother and life after meeting her; of his work with computers in the 60s and 70s and work with my mother in a family business. We journeyed together through his many retirement adventures. When he talked about Mom, us kids and sea travels there was color in his words and a smile on his face.

When Mom and I were alone I asked her for clarification on some fuzzy points. “He said he met you when he worked in a street level office.”

“I met him at a party,” she corrected. “I had gone with a date who knew him.”

“So Dad stole you away from your date?”

“No…” and she told me of their courtship. It was a story peppered with minor characters from the periphery of my childhood who suddenly became people that I wished I had known better because, quite frankly, they sounded delightful.

The notebook filled and the week ended. I didn’t want to leave, but I had to. Leaving my parents hurt.

Two weeks later the call came in the middle of the night. Dad was gone.

The cancer that had been an unwanted participant in our lives for over three years went away and took my father with it.

I was left with a hole in my heart and a notebook full of his life.

“Susan, would you help me write my memoir?” he had repeated after a nurse-interrupted, restless hospital nap that first day of my visit. “No, that’s not the word.” He was silent in thought. “Obituary. Would you write my obituary?”

The day after he died I pulled the notebook out of my tote then stared at an empty computer screen. Although he was in a hospital room the whole week, I loved the time chronicling every word as he happily wandered the curvy path of his life with me.

I dreaded doing what he had asked.

But time had run out.

With a wet face and blurry vision I forced myself to begin.

After nearly 81 years of a very well lived life…

Got at thought about this? Cancel reply

Stuff I write about by subject

Stuff I wrote before today

Follow Slice From the Middle: Susan Vollenweider on WordPress.com

My parents called this their “Breakfast China.” We did always have pancakes on it on the weekends, and when we moved out, every Sunday they would have their weekly poached eggs and fruit salad on it. It was their breakfast china for when there was a need for an elevated breakfast.
Loading Comments...
%d bloggers like this: