I thought I was soooo ahead of the game. Weeks ago I had my act together and squared away Noah’s Halloween costume.

It’s a long story, but here are the key points.

1. I have always made the kids costumes, it’s my thing- the only thing that gave me Super Mom Cred. I took pride in it and when people said to my children, ” You are the most adorable (fairy/dinosaur/lighteningbolt/spinachcan/Max/goldfish) on the street!” I beamed.

3. He used my own lesson of learning to adapt and roll with it on me. I had no rebuttal.

4. Boba and blaster-weapon (which also went against my usual rules) were purchased and hung in his closet for weeks.

Boba Fett hanging with costumes of years past in Noah’s closet (staged. He’s EIGHT. No eight year old has a tidy closet with only Halloween costumes in it.)

A week before Halloween Noah had his class party. Why so early? Parent/Teacher conferences were set for Halloween and the day after. Yes, right. No school ON HALLOWEEN or THE DAY AFTER.  Yippee.

But, Noah had his party and I got called to do a work thing right as it was starting and it’s a horrible choice to have to make… but I didn’t go to his party. He got himself in his costume, and according to him, I was the only parent not there.

I found this very hard to believe but when he got off the bus a wave of Mama Guilt busted the banks and slammed into me- I couldn’t argue. He looked so…so…so pathetic. He shuffled his feet home, hand covering the tear in the tushy that showed me he had left his boxer shorts on while the back of the costume was so tight it wouldn’t close. I was awash with guilt, he was flashing the rest of the kids on the bus.

A week before Halloween

Young Master Noah had a serious growth spurt in October, this costume fit him a month before. The pants went down to his sneakers then, but now? Monster Wedgie.

After having paid for a costume the thought of spending MORE money on Halloween made me feel a Monster Wallet Wedgie.

So we spent a couple valuable days brainstorming costume ideas based on materials we had available.

The thrill of costume making that I normally had was gone as we rushed with limited time and materials.

But we did it together and it’s one of those crazy memories that we will always have.

“Hey, Mom,” 35 year-old Noah will say, “remember that time I grew and we had to make a costume right before Halloween?”

“Yes, Son,” I’ll shout because I am hard of hearing and assume everyone else is, too.” You were the most adorable ketchup bottle with a Star Wars blaster on the street.” 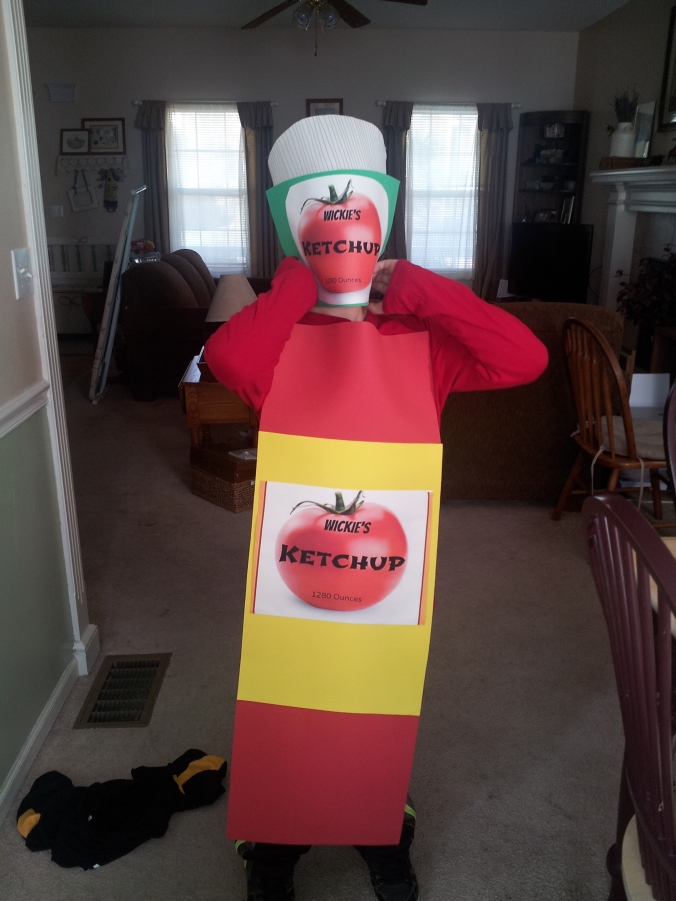 We’re making the thing over his face a mask, it didn’t have holes in it when I took the picture.

The back lable-he wrote it. If that sucker wasn’t hot glued onto the shirt within an inch of it’s life, I would shove it in his babybook.

Stuff I write about by subject

Stuff I wrote before today

Follow Slice From the Middle: Susan Vollenweider on WordPress.com

Since April 2019 we’ve been planning a trip to see places in and around London that we’ve talked about on the podcast. That tour began today with 50 of our newest friends! My brother is my Plus One, we started the day with lunch at Sky Garden, went to Portobello Road then kicked off the main event with a tour around the city! #historychicksfieldtrip
Loading Comments...
%d bloggers like this: